The beast Blerkafeld is one of the mightiest dragons, and even more conceited.  After pilfering magics of time and space he has built his own little pocket world, pulling people from all over the Middle Ages to be his loyal worshipers.  The only problem is, one of these groups is secretly a Renaissance fair…

The beast of Kidnapt Valley

Four waterfalls marked the center of the cavern’s many tunnels and chambers. The place was most curious, as the passageways looked naturally formed, the walls porous and uneven, but its layout was certainly the work of intelligence. Each fall was like a curtain separating four identical tunnels from each other.

By unknown force, one fall’s flow ceased just as a cluster of four people reached it, letting them view the rising column of the central shaft. They dared not step over the wet line in the dirt; their invitation had warned them not to do so. END_OF_DOCUMENT_TOKEN_TO_BE_REPLACED

The finals dinner was the first time everyone was in the same place since orientation. Dean Mystpass, who had made exactly zero appearances since then, was there, thoroughly surrounded by staff and newly elected officials so that not a single student could reach him and say what they thought of his first crack at the school. END_OF_DOCUMENT_TOKEN_TO_BE_REPLACED

Trouble came to all of Cay Royal, not just its students. Word of the intruder and their power spread quickly. Any calls for Dean Mystpass to invent suspension or detention were neutralized when the safety precautions taken essentially counted as punishment. The whole college went on lockdown, students now escorted in groups from tent to tent and back to the dorms by either professors or security guards. END_OF_DOCUMENT_TOKEN_TO_BE_REPLACED

Dove looked through her notes while she waited for him. They weren’t physical notes of course. She’d been experimenting with compressing the lectures down to single paragraphs in her mind, trying to get the information as dense as possible to save memory space, which, much like using a computer, simplified her magical efforts. The one she’d created from the introductory Evil Eye Era lesson felt expertly compacted:

Magic is the psychic power of secrecy, threatened by transparency. In its early days even the people using it did not understand its nature. The first system was the evil eye, by which spells were cast with intense unblinking stares at their targets coupled with focused thought and emotion. It flourished for hundreds of years until its collapse in 1899, when a combination of exploding population, scientific advancement, and superstition regarding the evil eye specifically made it too common of knowledge. After it ceased working it took more than two decades, and a notable worldwide war, before a new method took root. Thus we have the snap system, powered by concise incantation words and kinetic catalyst sounds. END_OF_DOCUMENT_TOKEN_TO_BE_REPLACED

Magic is real, as long as you’re in the know.  It’s a lot subtler than people think, mostly invisible in fact.  It can give you the second last sip from a canteen, let you push a pull door, or make your fortune cookies accurate if as vague as ever.

Dove used it on the stage, her audience only thinking they were looking at illusions.  She was happy with that, but now her parents have dragged her to a strange island, the site of a failed music festival, and there’s talk of starting a new country, and a new school, both magical in nature…

Author’s Note:  I wrote this novella to be my ‘Harry Potter’, but given my recent disappointment with that author it now works pretty well as a replacement for me.  I hope you can get some enjoyment from it as well.

The Moneyed and the Mystic

The sand would’ve been much too hot for bare feet under normal circumstances, but the Théard family didn’t pack any normalcy for the trip. They always left that at home, a house that sat empty most of the time while its supposed occupants were off romancing the stages of the Caribbean and France. END_OF_DOCUMENT_TOKEN_TO_BE_REPLACED

In the world of bird watching competition can be intense, sometimes even deadly, sometimes even magical.  There are birds you can’t see unless you devote your life to seeing them, and a few are in this short story with an aesthetic best described as ‘birdwatchingpunk’.

The Field Guide to Fantasy Birding 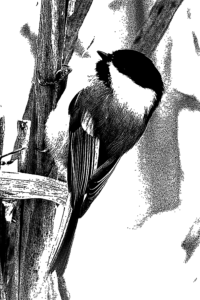 PHYSICAL DESCRIPTION: a four to six inch bird which may weigh as much as an ounce. Gray wings and a brown streak across the head are the most common features, but the easiest way to identify it is by its white face with gray patches at the sides. It also has short wings and a short dark bill.

DIET: feeds mostly on seeds and insects by probing in bark and across the forest floor. It favors wood beetle larvae most highly.

BEHAVIOR: not picky when it comes to choosing a mate, though they will often mate for life. Boreal chickadees rarely build their own nests, instead choosing to occupy the abandoned efforts of other birds like the woodpecker. Only one egg is laid, its size surprising given the diminutive creatures that produced it.

To nearly every person who looked at the amateurishly-produced paper it was just a page out of a field guide, a work in progress at best, something to keep an old lonely man busy. Even his family members would not have recognized it for what it was, because they, even the widower’s children, didn’t recognize him for what he was. END_OF_DOCUMENT_TOKEN_TO_BE_REPLACED

Well, they aren’t quite blurbs, given that these stories are, you know, short, but now that we’ve got descriptions for our books and novellas available, it’s time to move onto these.

If you don’t know me, I’m Blaine Arcade, a speculative fiction writing hobbyist, and I write lots of out-there science fiction, fantasy, science fantasy, and a little horror.  All of my stories are available here and free to read, so please check them out if you’re interested.  Happy reading!

Somewhere in the enchanting space between dinner theater and the wild west, performer Madrigal Mora finally gets his shot to use that ol’ dirt-kicking magic, but the owner has seen fit to cast him as the villain… END_OF_DOCUMENT_TOKEN_TO_BE_REPLACED

Hot off adding blurbs to all my books here on the blog, I figured I’d do the same thing for all of my novellas as well.  I write lots of wild speculative fiction, and it’s all freely available here, so please check out anything that looks interesting to you.

It’s the mid 2010’s, justice systems grow ever more rigid as crime takes to the internet.  With a little help from a crowdfunding website, a newly forged team of superheroes is looking to fill in the gaps, and provide their backers with some cool merch along the way!

Get all the updates straight from each hero as they take on vicious trolls, a trading card blackmail ring, and an ancient fungal entity with its own world wide web in this trilogy of novellas that also work together as a book. END_OF_DOCUMENT_TOKEN_TO_BE_REPLACED

In doing a little reorganizing around here I realized I don’t have blurbs up for my work.  I’m adding them in order to put my best foot forward, and collecting them here in this post along with links to the work.

Please give them a read, and if any of my speculative fiction nonsense sounds interesting you can check out the whole works here and free of charge.  This post is all my novels and my gamebook, with novella blurbs and short story descriptions found here.

Labor of Ruby and Pearl

A pact struck in the distant future, after mankind has colonized dozens of worlds and diversified into engineered subspecies, saw the death of guns and missiles.  With the new stigma of ‘farcoward’ weapons comes a return of the sword, shield, and bow.

Dana Rudolph is a grumpy travel writer hopping world to world, keeping to himself until date of publishing, when he is pulled into a vast, and surprisingly icky, conspiracy where he must do his best to protect the ‘appearl’, an anomalous learning gem that formed on its own inside a supercomputer.

Follow him and his sword as he teams up with an amazon and a leprechaun to dismantle the supposedly divine, forcing him to confront his traumatic past. END_OF_DOCUMENT_TOKEN_TO_BE_REPLACED

This is just a quick post to talk about my newly completed epic-comedic high fantasy book series: Captain Rob.  It’s been a long time and a lot of work, but I’m happy with how it turned out.

The story follows a crew of pirates in their magical world that just so happens to be… a gigantic public restroom.  If you would like you can join the sink swashbucklers in their fight against monsters and bathroom puns here, and free of charge.  Here are some links to each book, starting with the first.

Give them a shot if you’re bored and like fiction that’s pretty out there.